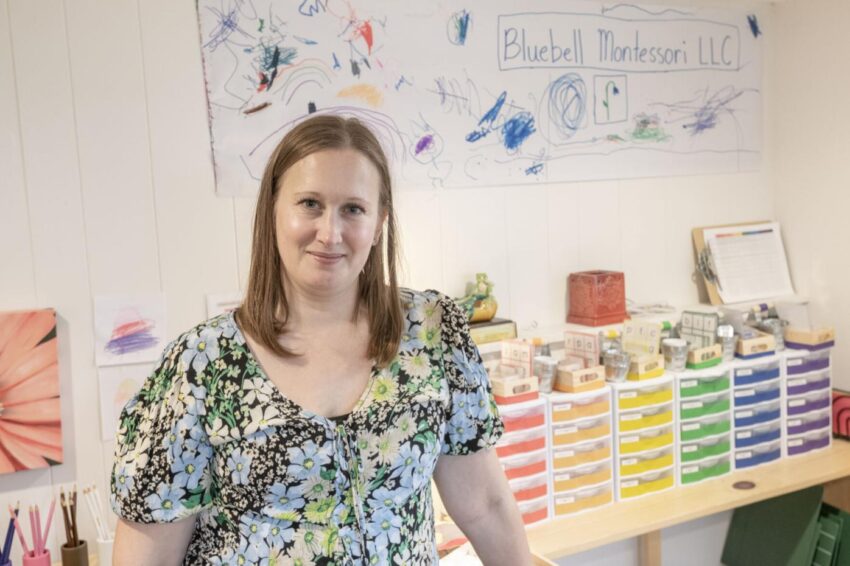 Bluebell Montessori preschool has been leading the charge of Montessori education in
Indianola for years. Now, they are looking for space to grow by seeking out a new location,
one that Shelby Miller hopes will be open by this fall.

Miller, owner and preschool teacher at Bluebell Montessori, has been operating the state-
registered in-home preschool in her basement since 2019.

According to Miller, Bluebell Montessori is a preschool program that follows the Montessori
philosophy of education and childhood. In a Montessori environment, children choose their
own activities and experiences and work at their own pace with the teacher’s guidance.

An Indianola native, Miller first worked in a Montessori environment in 2009. From there, she
went on to teach in Taiwan and North Carolina. All the while, though, Miller couldn’t stop
thinking about Montessori.

Miller took a brief break from teaching, but in the end, she felt a pull to continue.
“I thought, ‘well, if I’m going to go back to teaching, I really want to give Montessori a try,’”
Miller said. “That’s when I started pursuing my training.”

Initially, Miller planned to move out of Iowa. However, amidst the birth of her son, Miller
ended up sticking around. She knew instinctively she wanted her son to go to a Montessori
preschool, but there were no options available in Indianola. There was only one solution: to
open her own.

“I thought it was kind of funny because I did not live in Indianola and I didn’t really see myself
living here,” Miller said. “But I think it was kind of fun to be able to come back to my
hometown and do that.”

Miller brought up the idea to her neighbors and friends, and interest quickly grew. Now, Miller
says she has a continuously expanding wait list, with daily inquiries from interested parents.

“I just got so many people that were reaching out to me, calling, emailing or Facebook
messaging, just asking about it,” Miller said. “That really kind of pushed me to keep going with
it, because it is a big undertaking. It really motivated me.”

Miller never intended for her in-home preschool to be permanent; moving to a new location
was always her dream. Due to the regulations placed on in-home preschools, Miller has
previously only been able to teach six kids at a time. In the new location, Miller hopes to serve
children ages 3-6 and enroll up to 40 students part or full time between the hours of 8:30 A.M.
and 3:30 P.M.

“As someone who’s taught for a number of years, I feel that I enjoy having a bigger
group of kids because I think it’s good for them to have more friends and possibly more diversity,” Miller said.

Miller is currently deciding between two locations for Bluebell Montessori. In May, she went before the Indianola Board of Adjustment to request that it make a special exception to allow the preschool to use the building at 102 North Jefferson Way. The request was approved unanimously, with the stipulation that the playground was fenced in, the parking lot was restriped and there was a change of
use. According to Miller, she is in the process of completing negotiations for the new location.

Bluebell Montessori hopes to open in its new location this fall. In the meantime, Miller is
looking for qualified candidates to work at the preschool. Preschool enrollment is also now
open. To apply or get more information, message Bluebell Montessori on Facebook or email bluebellmontessori.ia@gmail.com.