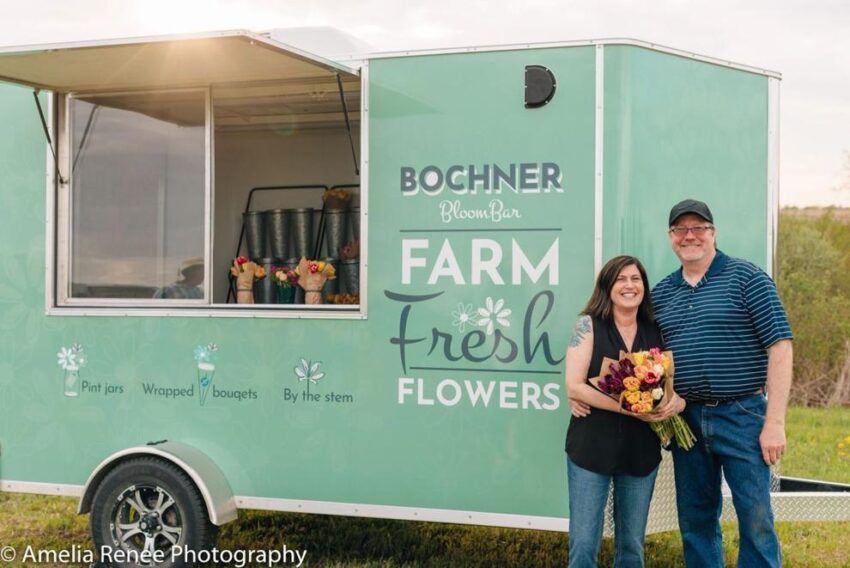 For three years, Lori and Jim Bochner have been the proud owners of Bochner Farms, a little
flower farm with a big heart. Now, the pair is taking their love of flowers on the road with The
Bloom Bar.

The Bloom Bar is the only mobile flower trailer in central Iowa, dedicated to bringing fresh,
locally-grown blooms to Iowa communities.

“It was a way to set ourselves apart,” Lori said. “Over the last few years, there have been a lot
of local flower growers around Central Iowa popping up and that’s wonderful because local
flowers are the best. But we wanted to find something that would be different from what any
of the other farms around Iowa are doing.”

After Lori and Jim’s friend and fellow flower farmer, Stacy Mueller of Tiny Acre Farms,
announced that she would no longer be operating her farm and flower truck, the couple
realized there was now a gap in the Des Moines community.

“The idea actually was sparked last year,” Lori said. “We finally made the ‘go’ decision around
Thanksgiving, and then we just spent the entire winter getting the trailer, getting it all
customized, getting it branded and preparing for launch.”

The Bloom Bar officially opened for business on May 8 at the Rustic Home Vendor Show.

“We sold so many flowers that we literally had to make bouquets in the trailer,” Jim said. “We
didn’t have a workspace, so we were doing it on top of chairs. We’ve sold out every place
we’ve been so far and had to run home to get more flowers.”

With a few events now under their belts, Lori and Jim feel as if the Bloom Bar is finally hitting
its flow. Not only has the trailer been a hit, but it’s also brought Bochner Farms newfound
publicity.

“You’re reaching a whole different segment of folks because it’s a brand new way to bring
flowers to the community,” Lori said.

While Lori and Jim are thrilled about people’s excitement over the Bloom Bar, their mission
goes beyond just selling flowers. Through their Giving Color initiative, Bochner Farms donates
a meal to Meals of the Heartland for every bouquet sold. Each meal feeds six people. With the
Bloom Bar sweeping central Iowa, Bochner Farms is able to continue its mission of giving back
to the community.

“Every year through our flower sales, we feed thousands of people,” Lori said. “That just
touches our hearts. Flowers bring joy to people and to also have them feed people, that’s kind
of our ‘why.’”

Both Lori and Jim are grateful for the community support and are looking forward to all the
events ahead.

“Everybody’s been so nice and so supportive,” Lori said. “It’s just been a lot of fun.”

The Bloom Bar will be at the Indianola Farmers Market on Saturday, June 19. For the full
schedule, visit https://bochnerfarms.com/the-bloom-bar.