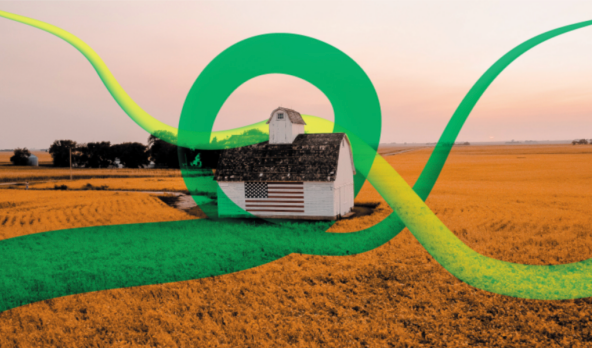 The Green New Deal has often been lauded as a plan catered to liberal coastal elites, but not much attention has been paid to how it would affect midwestern states like Iowa. However, with climate change already rearing its ugly head, some Iowans believe the Green New Deal is essential for ensuring the state’s prosperity moving into the future. In 2019, 48% of likely Democratic caucusgoers supported the Green New Deal, according to the Des Moines Register.

The Green New Deal, originally introduced by Rep. Alexandria Ocasio-Cortez of New York and Sen. Ed Markey of Massachusetts in 2019, is a congressional resolution with the goal of tackling climate change in the U.S. The proposal calls on the federal government to significantly reduce greenhouse gas emissions and divest from fossil fuels.

The proposal also calls on the government to ensure clean air and water and a sustainable environment for generations to come. To do this, the Green New Deal proposes a “10-year mobilization” period in which the government would meet 100% of the country’s power demand through renewable energy, upgrade to energy-efficient smart power grids, work collaboratively with farmers to reduce pollution and greenhouse gases in the agricultural sector, and more.

While climate change is often linked to rising sea levels or forest fires, Iowa is already experiencing its effects. The Iowa Department of Natural Resources reports that the state has seen an 8% increase in precipitation from 1873 to 2008. Furthermore, long-term winter temperatures in Iowa have increased six times more than summer temperatures.

Natural disasters, such as floods and the recent derecho, can be attributed to climate change in Iowa. These cases of extreme weather not only impact the agricultural sector in Iowa, but also the livelihoods of thousands of Iowans.

“For Iowa, climate change is going to cause us to have more mass flooding in the spring, longer droughts in the summer and longer heat waves, and more intense and extreme weather,” said Jake Grobe, a climate justice organizer for Iowa Citizens for Community Improvement.

A central part of the Green New Deal is focusing on clean energy throughout the U.S. While companies such as Alliant Energy and MidAmerican Energy both have initiatives to drastically cut carbon emissions, the two still have a combined nine coal plants in Iowa. In order to prevent further pollution, Grobe says the easiest thing Iowa can do is to shut down these plants.

“We have to upscale wind and solar, and at the same time, we’ve got to shut down every coal plant and every natural gas plant because most of our emissions come from that,” Grobe said. “That is the most easily doable. We have all the technology to do it right now.”

“We have to upscale wind and solar, and at the same time, we’ve got to shut down every coal plant and every natural gas plant because most of our emissions come from that.”

Iowa is already making progress in terms of renewable energy. According to the American Clean Power Association, wind is now the largest single source of electricity in Iowa. The state is generating more than 10,000 megawatts of wind energy, making up more than 40% of Iowa’s total electricity as of 2019.

Critics of the Green New Deal often say the proposal will cost Americans jobs, given that the proposal advocates for closing down coal and natural gas plants. However, the U.S. Bureau of Labor Statistics reports that wind turbine service technicians and solar photovoltaic installers are two of the fastest growing occupations in the U.S.

The Renewable Energy Technology program at Des Moines Area Community College is a testament to this new and rapidly-changing field. The program was introduced in 2020 and focuses on both solar and wind technologies. The college also offers an associate degree in wind turbine technology specifically, which it has had for several years now.

“We began hearing from employers and watching more national trends [that made us realize] we needed to make sure that we were imparting some of that renewable energy on a broader basis than just wind,” said Bryan Burkhardt, department head of the renewable energy technology program.

With the increased demand for solar technology in particular, Burkhardt believes there will be plenty of jobs in manufacturing the equipment, as well as installing and transporting the equipment. Still, Burkhardt acknowledges the fear many feel about the possibility of job loss.

“Whenever we’re giving this push to do something new, I think we have to understand that there’s going to be jobs associated with it,” Burkhardt said. “However, the concern obviously is they’re not going to look exactly the same as before, and that can be scary and that can be intimidating to those who have been rather comfortable in their current field.”

Iowa Republicans and other Green New Deal critics have remarked that the proposal would hurt Iowa farmers. In October 2020, the American Farm Bureau and the U.S. Chamber of Commerce warned Iowa voters that the Green New Deal would bring increased costs to the agricultural and manufacturing sectors, according to the Cedar Rapids Gazette. Yet, a central part of the Green New Deal involves working with farmers to invest in a regenerative agriculture system. This system mirrors how Native Americans originally tended to the land prior to American colonialism. While climate activists, like Grobe, acknowledge that changing agricultural systems could take time, he believes the process is worth it.

“What [regenerative agriculture] would do would be to essentially make your land more valuable because there’s less runoff; it replenishes more nutrients into the soil,” Grobe said. “It also improves your yields too, so you can actually sell more and have a higher value product.”

In addition to the Green New Deal, Iowa CCI supports THRIVE, another congressional resolution dedicated to mobilizing against climate change, racial injustice, and the current economic crisis. With President Joe Biden in office, and a Democratic majority in the House and the Senate, Grobe believes there is no time like the present.

“We have to put the pressure on Joe Biden,” Grobe said. “He is pivoting now to his Build Back Better plan for a big economic recovery package. That needs to be the THRIVE Act, which would ensure that working people benefit most, that frontline communities who have been hurt by environmental racism get the most investments, and that it’s not just green capitalists who benefited from the transition to renewable energy.”